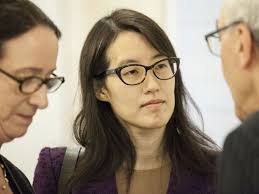 Post-revolution,  the very first law promulgated by the new communist regime under Mao Zedong in China was the Marriage Law of the PRC, abolishing the feudal system of  arranged and coerced marriages.

Mao Zedong proclaimed that  men and women are equal  and famously said “women hold up half the sky”.

A lot has changed since the heady post-revolution days. The cultural revolution, for one, which affected the lives of nearly everyone alive in China at the time.

With the growth of the market economy, what are the opportunities for women? Whilst Jack Ma, founder of Alibaba, often attributes the success of his company to the number of women he employs, the truth is somewhat different.

Advertisements targeted at employing men in tech companies use women as the bait to attract men. From benign ads showing women listing the attributes they like in men (“must be a techie”) to extremely misogynist advertisments which are not simply ‘borderline’ sexual harrassment – some of these ads are blatantly and deliberating identifying women working in tech companies, not as the intelligent, hard-working and brilliant IT specialists that they are, but valuable only as someone being available for sex. Such ads would be cause for legal action in many countries in the world.

In fact, more than 55 % of Chinese tech start-ups are driven by women. Jean -Liu is one of those women. After gaining a Bachelor of Computer Science at  Bejing University, she worked for Goldman Sachs for a decade and then joined Didi, a Uber-like company she made global and is now one of the world’s most successful start-ups, thanks to Liu.

Ellen Pao was an enormously talented IT specialist – a degree in engineering, a degree in law, experience with high-level start-ups – the list goes on – working fora silicon valley company. She sued the company for sexist practices, sexual harassment and discrimination, and lost, at great personal expense. After leaving the company she started her own company to promote diversity in IT and has written a book. about her experiences. Now women and minorities in IT suing for discrimination as become known as “the Pao effect”.

If women hold up half the sky, and are so talented in the IT field, why then, do advertisements like the ones seen in the following video-blog by commentator and novelist Lijia Zhang still exist?